The Attitude of Engineering - by Grant Greene

Get Yoshed is excited to welcome back Grant Greene in this week’s post!
Hi everyone! It’s been awhile since you have seen me on getyoshed.com. A lot of things have happened since Yosh’s and my first blog. In what may seem a bit of irony, I have gone back to school to finish up my undergraduate degree. If you recall, Yosh suggested that I needed to take a ProTools training course. As it turned out, I did have to take a hard disk recording class as part of my degree. While it might seem there isn’t a lot to learn in an intro to hard disk recording class for someone that has been working with ProTools and other hard disk recorders for over 15 years, I did learn a few tips and tricks, but what I learned the most was a few perspectives of the up and coming engineers in this business and the instructors teaching these students.
During one of the first discussions of the class, the instructor asked the class what made each student hirable in the industry. Most of the students answered that their personality, or good attitude, made them good candidates to be hired at a studio. The instructor quickly dismissed these claims and said that to him, as a studio owner himself, knowledge and skills were more important than anything else. While I agree that you need to be smart and have a knack for learning quickly, I disagree with him that attitude takes a back seat to how well you know how to record, mix, or wire a studio.  Over the past 11 years, I have learned A LOT watching Yosh work. I can’t recall once where he told a client that something couldn’t be done. You give Yosh a problem, he will find a solution. While this might seem to validate the opinion that knowledge is more important to attitude, it is actually the opposite. It’s Yosh’s attitude that drives him to come up with a solution to any problem. He might not know the answer immediately, but he will come up with one, if not five. This is what makes a great engineer in my opinion.
Over the years, Yosh has had many interns and I can tell you this, while most had the “chops” to be successful recording engineers, few had the right attitude. The right attitude makes up for any lack of knowledge. Back in the “day”, there were no schools for recording. Those interested in breaking into the business didn’t walk into a studio with the knowledge to run a large format console, multitrack tape machines, and all the outboard effects gear. They weren’t expected to be able to record a full band or mix an album on their first day either. What they were expected to do was to make coffee, answer phones, get things for the clients, clean the studio, and keep their mouths shut. So you might ask yourself, how did they learn? Well this is where attitude comes in. Those with the drive and determination found a way to learn. If they were told there was a session at 10 a.m., they would arrive at 8 a.m., or earlier, to be sure everything was in order and help the client set-up for the session. If they were told that they only had to work until 5 p.m., they would stay to 2 a.m. to help the assistant engineer tear down. If there was no session happening at the studio, they would ask the studio manager if it was o.k. if they used the studio to hone their chops. Those with the right attitude can always learn something they don’t know. Working in an industry where things are rapidly changing, we are constantly having to learn. There is no way we can know everything about every piece of gear or software out there, but we can have an open mind and a drive to educate ourselves and add more tricks to our arsenal.
In my next appearance here on getyoshed.com, I’ll touch on things interns should and shouldn’t do in the studio.
- Grant Greene
9 comments: 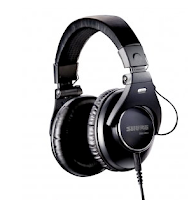 These days, it is always good to reference your mixes on headphones.  Sometimes listening to your mix on an iPod with earbuds just isn't enough…
Recently I had the opportunity to try out a pair of Shure SRH 840 headphones

.  Shure is a company known for quality, durable, professional products.  We know that about their microphones, and their headphones are certainly set to the same bar.  Before you even put them on your head, the SRH 840s stand out.  Opening the box reveals sturdily built headphones that come with a convenient carrying bag, nearly 10 ft. detachable cord

for the ear cups, and a high quality, gold plated 1/8’’ to 1/4’’ adapter.
If you want your investment to last, the replacement pads are a great benefit, and even if you wear both included sets out, you can buy more pads sold separately for under $20.00, or swap them out for SRH440 pads if you like those better.  The detachable cable makes a big difference as well.  It makes replacing the cable of the headphones both amazingly easy and really affordable.  Of course, with Shure-like robustness, they made certain the cable won’t fall out of the headphones mid-take with a special bayonet clip.
Decidedly, the importance of sonic quality heavily outweighs all this out-of-the-box appeal, and the SRH 840’s sound live up to the same standard of quality.  My first impression was that there was a clarity and tightness in the bass, and still a consistent balance of all the frequencies in the mixes I referenced.  When producing headphones it’s easy to screw up the bass, the high end, and the mids, and it’s a great treat to listen to a pair with such accurate bass, smooth highs, and a midrange that creates a good mix, consistent with my reference speakers.  So many headphones have a scooped out midrange that sounds hyped, but as a professional, I don’t want hyped, I want precise.  I need to know what frequencies are being produced.  Professional grade equipment should absolutely be different from consumer gear, and Shure’s SRH 840s were truly built for the professional engineer or musician.
Certainly, if you’re in the market for a new pair of headphones, the SRH 840’s are a worthy candidate.  Comfortable enough that those long hours of headphone use won’t leave your ears in pain, one of the best headphones sonically I’ve ever heard, and the same durability the Shure name is known for.  These headphones are an incredible bargain, as well.  Priced at only $199.95, the SRH 840

’s are a sure bet (pun intended).
I’ve outlined a few specs for you below.  Have any of you used the 840’s?  What do you think? Leave your thoughts in the comments!
Transducer Type: Dynamic neodymium magnet
Frequency Range: 5Hz – 25kHz
Max Input Power (1kHz): 1000 mW
Impedance: 44 Ohms
Sensitivity: 102 dB/mW
Driver Size: 40 mm
2 comments: